“The animist’s sacred obligation to understand nature
exists in order to ensure that he knows how to live within an environment
with the least unnecessary harm.”

Without a doubt, studying and learning about Druidry is a crucial aspect of being a Druid. After all, Druidry has a strong philosophical component. However, practicing Druidry is just as critical. It is a spirituality and a way of life, as well as a philosophy. We would miss a considerable part of the journey if we simply kept our Druidic thoughts in our heads.

We come together throughout the year to facilitate the doing of Druidry. We meet for ceremonies for the eightfold wheel of the year. In between those times, we gather around to keep the fires going.

Ceremonies:
We hold celebrations and ceremonies for eight festivals in total. Four ceremonies focus on the fire festivals, while the other four ceremonies focus on solar festivals. Celebrating these festivals with ceremony is a way to honor our past & our ancestors, the present & the turning of the year, and our future & our goals. Additionally, for many Druids, they are a time to honor spirits and/or deities. They give us time to connect with each other, to bond at times of the natural crossing of our mutual paths.

Newcomers are asked to meet the group during an informal gathering before joining in a ceremony. 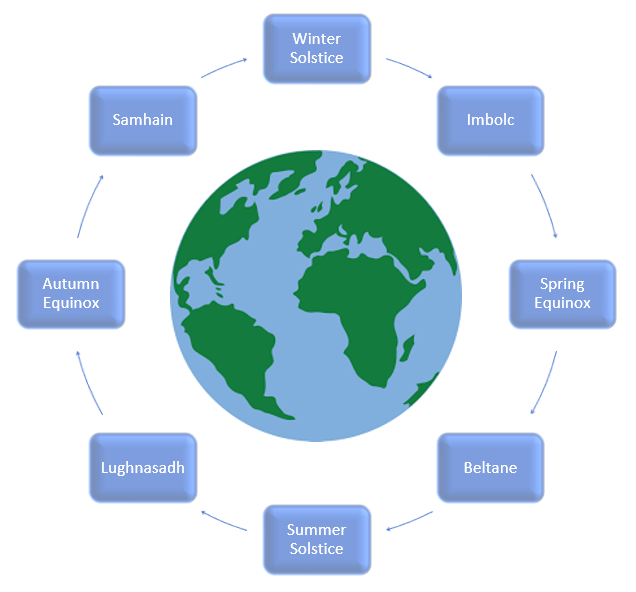 Gatherings:
Our ceremonies happen eight times a year. Gatherings are a way to keep our practices going, to check-in with ourselves and each other on our goals and progress, and to keep the spirit of the season alive. Gatherings create opportunities for us to hold smaller “in-between” celebrations. They also provide excellent times for holding an eisteddfod!

Our 2023 calendar is below. Dates may change, as needed. For ceremonies, we try to strike a balance between convenience (e.g., the nearest Saturday) and the actual date. We also host some evening ceremonies.

We generally hold one or two informal gatherings between each festival. They tie-in to the preceding festival (e.g., a gathering after Alban Eilir will reflect back on what was learned and celebrated on the Spring Equinox). In this way, we give continual attention to the turning of the wheel of the year. These are usually on Saturdays, starting around noon.